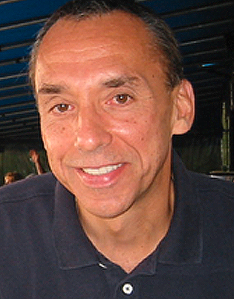 My husband, David, bought a Catrike 700 in April 2015.  He rides three days each week, 15 miles each day. David loves his trike. Despite not being able to walk outside unassisted because of a balance problem, he feels “normal” when he rides. He has found that people have a lot of curiosity about the trike. People have stopped him to ask questions. One woman talked to him from her car when they were at a Stop sign.

David is excited because he just broke 2,500 miles. But he still has a ways to go before he equals the 5,390 miles ridden by Dan Zimmerman and Catherine Brubaker on their cross-country trek. 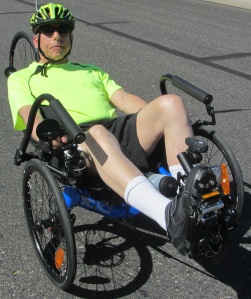 survivor) got a black Catrike 700. They pedaled across America diagonally, 5,300 miles, and it changed each of their lives.

David Figurski (TBI survivor) got a trike, an electric blue Catrike 700, the same model as Cat and Dan’s, but a different color.

Donna O’Donnell Figurski (copycat) got a trike, too. Though to show her independence, she didn’t get a Catrike 700. She went for the

Now David and Donna want to match Cat and Dan’s GOAL! We want to trike 5,300 miles in the desert. I wonder how long it will take us.

(Photos compliments of Me.)

FREEDOM and a Blue-Metallic Trike 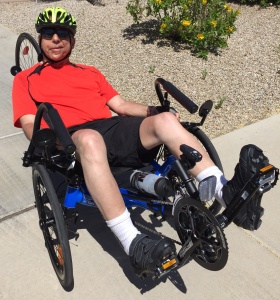 April 9, 2015 marks a pretty exciting day for us. It’s the first official day of David’s independence since his brain injury in 2005. David recently bought a Catrike 700 recumbent trike. This sleek, low-to-the-ground, metallic-blue machine will be his wheels and his freedom.

Because of severe balance issues due to his brain injury and the damage to his cerebellum, David has been unable to leave our home unattended for the past ten years. With his Catrike 700, he can hop on and and pedal away for hours and hours. (Well, not really hop on, but that sounded better than crawl or climb on.) Of course, his limitation of getting off the trike because he is unable

to walk anywhere on his own remains a problem. But, that won’t deter David.

David’s first excursion was a 5-mile trip around the winding, scenic roads in our neighborhood. Pedaling down streets lined with palm trees and a variety of cacti, many of which are in bloom right now, was liberating and fun, if the grin plastered on his face when he returned was any indication.

Later the same afternoon, David guided me on my first recumbent-trike trip. I have a yellow/mango Pocket Catrike, and I love it.

Today, David is riding with friends in a neighboring community. What fun! This is only the beginning. 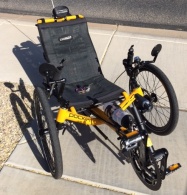 (Photos compliments of Me.) 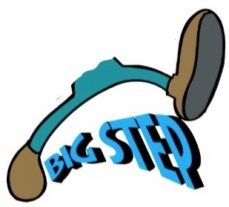 SPEAK OUT! Itty-Bitty Giant Steps will provide a venue for brain-injury survivors and caregivers to shout out their accomplishments of the week.

If you have an Itty-Bitty Giant Step and you would like to share it, just send an email to me at neelyf@aol.com.

If you are on Facebook, you can simply send a Private Message to me. It need only be a sentence or two. I’ll gather the accomplishments and post them with your name on my blog approximately once a week. (If you do not want your last name to be posted, please tell me in your email or Private Message.)

I hope we have millions of Itty-Bitty Giant Steps.

Michelle Lee Bonnenfant (survivor)…With hubby’s help, I made it through a busy grocery store.

Ken, my hubby, got me in and out in one piece! He even stood three feet behind me in the check out so that I would not get crowded by people. It was the first time in months that I went through a check out. I was plagued by a lot of sweat and chest pain, but I still did it. I hate my TBI and PTSD (post-traumatic stress disorder), but Ken gave me a big hug and told me that he was proud of me. I’m exhausted, but pleased with myself!

Cara Lauderdale Eberle (caregiver)…The one-year anniversary of my husband’s accident was April 1st. While I was at work sitting at a table of four-year-olds trying to get them to do a project with me,

I saw them all stop and look up. Standing next to me was my husband holding a beautiful bouquet of flowers. I was in complete shock! He hasn’t shown any concern for the feelings of others since the accident. He told me he thought that he should do something to thank me for helping him get through the last year. This was definitely a breakthrough moment for us. 🙂

David Figurski (survivor)…I am excited! I took delivery of a Catrike 700 recumbent trike. It’s the same model that was used by Catherine Brubaker (a two-time TBI survivor) and Dan Zimmerman (a stroke

survivor) on their five-month, cross-country ride from Washington State to Florida. Cat and Dan espouse their new-found freedom, and their new physical capabilities are truly amazing. They both believe that riding a recumbent trike is great therapy. Also, my wife, Donna, just took delivery of the Catrike Pocket, a slightly smaller trike. Donna, Cat, Dan, and I plan to ride together.

Corina Mendoza (survivor)…I passed my teaching exam for Special Education! I passed both teaching exams I needed on the first try.

Congratulations to all contributors! 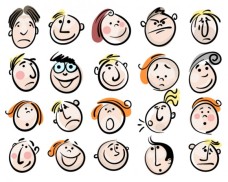 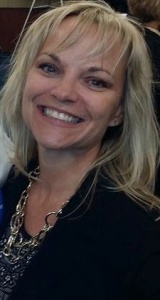 Catherine Brubaker is a two-time traumatic brain injury (TBI) survivor. Using her walker, Catherine, who was determined to take back her life, walked into Sun Cyclery in Phoenix, Arizona, in September 2013 and purchased a recumbent trike.

On June 29, 2014, she joined a stroke survivor and began what was to become the journey of her lifetime. Catherine and her new riding partner rode 5390 miles across America on their recumbent trikes. The trip took 5 1/2 months. It started in Anacortes, Washington, and concluded in Key West, Florida. Catherine pedaled over several high-altitude mountain passes and persevered through snow, rain, mud, and every imaginable obstacle. Through this experience, Catherine has been able to regain her freedom and confidence, find purpose, and rebuild her body as part of her recovery from undignified tragic circumstances. 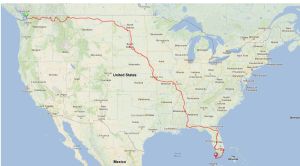 Catherine actively reaches out to inspire brain injury survivors to help them reclaim their lives through recumbent trikes and art. She is scheduled for several speaking engagements across the nation in 2015.

Catherine has partnered with “Spokes Fighting Strokes” (SFS) in her grassroots effort to encourage a national conversation about brain injury, regardless of its cause. Together, SFS and Catherine will teach as many brain injury survivors as possible to ride recumbent trikes to aid in their recovery. Success stories can be found on Catherine’s website (www.irideforhope.org).

As part of her recovery, Catherine was enrolled in a special program called “Artists for Trauma,” which has brought her great joy. Catherine has recently been named the Brain Injury Ambassador for this foundation. She is honored to be a part of this effort, and she looks forward to contributing her art and collaborating with artists and trauma survivors. Her works of art and photography can be found at http://www.irideforhope.org. All proceeds go toward her foundation. 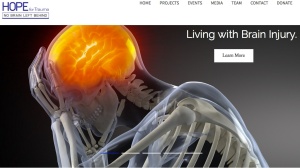 Catherine is also in the process of launching a foundation called, “Hope for Trauma.” Its mission is to encourage a national conversation about brain injury, regardless of its cause. Her foundation will also be concerned with brain injury’s impact on survivors and their families and with the invisible challenges they face.

Catherine’s road to her newfound freedom has been long and filled with obstacles. After being assaulted in 2010, which caused Catherine’s initial TBI, she had to relearn how to walk, talk, and eat on her own. This involved many months and multiple physicians (often several in a day). In 2012, Catherine’s heart began to fail, and she was on the brink of death. She received a pacemaker and a new chance at life. Luck was not on her side, though, and she was in a collision with another vehicle shortly thereafter. Catherine had to once again relearn how to walk, talk, and do basic daily tasks.

Catherine can no longer drive or live by herself. She lost her career and her ability to be independent.

Cognitively Catherine was set back to early grade school. Her primary relationship became strained, as her partner became her caregiver. Eventually the strain became too much for her partner. Faced with these losses, Catherine hit rock bottom. She tried to take her own life in March 2014. Shortly afterward, Catherine met her current riding partner. It was in that meeting that she learned of the ride across the US. That spark ignited her competitive spirit and gave her a new outlook on life.

Prior to her TBIs, Catherine was an accomplished professional. She went to Pacific Union College in Napa, California, and graduated with a B.S. degree in Psychology. She worked with military veterans and offered them financial, investment, and insurance services. She led a team of 12-15 associ 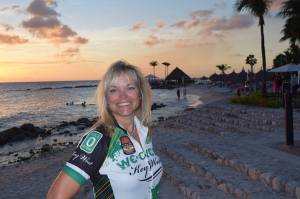 ates. During her career, Catherine decided to pursue a Master’s degree in Leadership, which she obtained in 2007. She accomplished this with a 4.0 GPA and while working full time! She was also an avid skier on black diamond runs, and she enjoyed running two miles daily, rain or shine.

To learn more about Catherine, check out these sites.