(Note: This is our second opinion essay about Dr. Bennet Omalu and his research with brain trauma. The first was published on this blog on December 17th.)

The much-anticipated movie, Concussion (trailer), is making current and former players of American football, their families, parents, fans, and coaches think about what is really happening in a sport that has become a large part of American culture. The movie has the same goal as we in the brain-injury community have – greater awareness of the delicate

nature of the brain and the ramifications of brain damage. The movie was released on Christmas Day, but it has made much news before its release.

The movie, which unsurprisingly is not sanctioned by the National Football League (NFL), tells the true story of the Nigerian pathologist, Dr. Bennet Omalu, and his discovery of the relationship of a neurodegenerative disease, which Dr. Omalu named “chronic traumatic encephalopathy” (CTE), and American football. Dr. Omalu studied the brain of Hall-of-Fame center, Mike Webster, 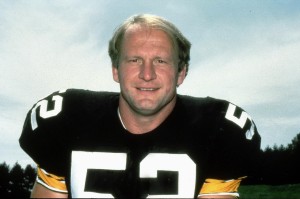 who died at age 50 homeless and with dementia. As shown in the Frontline documentary, League of Denial: The NFL’s Concussion Crisis (available free online), the movie shows how the multibillion-dollar NFL didn’t want to hear of Dr. Omalu’s discovery. The league’s questionable committee on concussions immediately attacked Dr. Omalu. It is a classic “David-vs.-Goliath” story.

(Dr. Omalu said in his Frontline interview, “You can’t go against the NFL. They’ll squash you.”) Former players have sued the NFL, arguing that the NFL knew of the dangers to the brain, but didn’t inform the players. In a class-action lawsuit, the NFL has recently settled for approximately $1 billion in medical expenses, but that settlement is being appealed by former players as inadequate.

Will Smith plays Dr. Omalu in Concussion. Will Smith, a former football fan whose son played high school football, recently admitted that he has not watched a full game of football since he made this movie. Peter Landesman, the movie’s director, played football into his sophomore year of college, but, knowing what he knows now, he would not let his children play the game.

So . . . what do you think? Is there something you are passionate about in this Brain Injury (BI) world? Do you want to be heard? Your opinion matters! You can SPEAK OUT! on “So Whaddya Think?”

Simply send me your opinion, and I will format it for publication. Posts may be short, but please send no more than 500 words. Send to Neelyf@aol.com

I hope to HEAR from you soon.

If you don’t like my blog, “Share” it intact with your enemies. That works for me too!