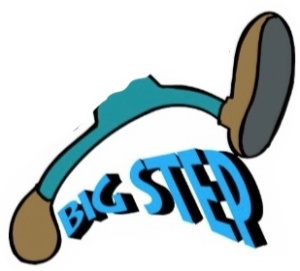 SPEAK OUT! Itty-Bitty Giant Steps will provide a venue for brain-injury survivors and caregivers to shout out their accomplishments of the week.

If you have an Itty-Bitty Giant Step and you would like to share it, just send an email to me at donnaodonnellfigurski@gmail.com.

If you are on Facebook, you can simply send a Private Message to me. It need only be a sentence or two. I’ll gather the accomplishments and post them with your name on my blog approximately once a week. (If you do not want your last name to be posted, please tell me in your email or Private Message.)

I hope we have millions of Itty-Bitty Giant Steps.

Bart Boughner (survivor)…For me, these past ten days were hard, but I held my head up and I did what is best for me and my kids. I allowed outside people to talk with my doctors. My kids are more than willing to help me with just my being honest. I showed them all my meds and explained every one of them. I stayed true to myself, and things turned out well! It’s never a good thing to hide things from people. I always stay an open book to anyone who wants or needs to know.

Bob Calvert (survivor)…I have had five surgeries since my last trip to Iraq and Afghanistan. I keep hoping that there won’t be any more surgeries. But, it looks like I have no choice for a hernia, and the first of two foot-surgeries did not go well. Next week, my doctor is asking Medicare to approve a wheelchair so I can get out of my apartment. Sometimes it gets to me, but what keeps me going is when I keep hearing story after story of what our military men and women and veterans have gone through as a result of their service to our country and what many of them go through every day. That keeps me sitting at this computer as long as I can every day and keeping our talk show (www.talkingwithheroes.com/about) and our mission going.

Michael Coss (survivor)…I am now starting to walk indoors without a cane – 9 years post injury. “Everything is possible when you believe.”

Penelope DeYoung (caregiver)…My husband had finished 13 days of HBOT (hyperbaric oxygen therapy), when, on Tuesday, October 28th, at 3:00 in the morning, I woke up to the bed’s shaking to find him having a grand mal seizure (the second one in five weeks and only the third in two and a half years). He was blessed in more ways than one. First, he had it in the night, so he was already lying down and on his side. I also kept my cool as I called 9-1-1. My husband has made a giant step forward because the doctor dropped a seizure medication that we now know was causing “brain fog.” He upped the dosage of another anti-seizure drug that was making my husband sick when it was started this past summer, but now his body has adjusted to it, and he is tolerating it very well. The higher dose of the “better” anti-seizure drug and the HBOT together have made Jim much more aware. He has shown initiation and motivation. We went to a spaghetti dinner in our hometown last night. People were awed by how much difference they noticed in his awareness. He knew many more people than I did. It was great to see so many people come up to him and say, “It is so good to see you.” Jim’s response to them was, “It is so good to be seen!” I love the progress he has made cognitively! Thanks for letting me share!

Jamie Fairies (survivor)…Hi, Donna. I saw your post on the wall of the group I created – Supporting ABI (Acquired Brain Injury). I thought that perhaps creating that group in 2007 to promote the awareness of brain injury and the Peer Mentor Support Program for those affected by brain injury would be considered an Itty-Bitty Giant Step. I am a survivor of multiple brain injuries.

Melanie Leatherman (survivor)…An Itty-Bitty Giant Step is something small that’s a big deal for us, right? I’m 4 years post. Every year, I’ve tried to go back to my old profession as a stylist, but it never worked out. Friday I tried again, and I could! Awesome feeling. I think it’s a big accomplishment for me. I can pretty much do everything now that I was told I couldn’t. I live alone with my 13-year-old and cook, wash her clothes, and make her lunches for school – things that most mothers don’t realize how big of a deal that is.

Barbara Zirilli-Lonergan (caregiver)…Today is day 40 for my dad. He’s still in the early stages of his recovery. He’s currently in a vegetative state, and he occasionally responds to commands. I am just thankful for today. Love to all of you.

Grant Mealy (caregiver)…I’m reminded again not to be so hard on my partner, who has PML (progressive multifocal leukoencephalopathy). He is not what he used to be, and he never will be again. He did not go through a bad illness to irritate me. I will forgive myself for yelling and move foreword. We are lucky to have each other.

Melinda Murphy (survivor)…One of my secrets that very few people knew was that I lost the ability to tie my shoes after my accident because I was unable to tie a bow. Well today, for the first time in over three and a half years, I did it. I have been crying for an hour. It’s the little things as well as the big that are so very important in that whole “independence thing.” God is so good to me.

Marti Lynch Owens (caregiver)…Gene’s Itty-Bitty Giant Step was last night (November 8th). (His accident was September 25th.) His trach has been removed. He said, “Home, Marti,” and I replied, “Not yet.” He asked, “Why?” and I tried to explain. He was angry, but I didn’t care – I was so happy to hear him speak. He always has emotions. After I left, the hospital called. He got himself out of bed. He was sitting on floor and pulled out his feeding tube, but he is fine – Thank God!

Shana Storms (survivor)…My Itty-Bitty Giant Step is that I went back to school. I got my BS degree. Now on to my MS.

Sunshine Struble (caregiver)…GIANT! January 6th will mark two years for my beautiful boy. He has not slept in his room since the incident – at first because his body was incapable of doing stairs, then because he was so fearful of being away from Mom and Dad. Tonight he is sleeping in his newly designed (in his way) room. I am so proud. It brings tears to my eyes.

Sandra Williams (survivor)…I can exercise without shaking. My shaking wasn’t from fatigue. When I began any form of a stretch and held, my legs would shake, even at the beginning. It’s not the same as shaking when your muscles are tired.

Sandra Williams (caregiver)…My son asked for his own 504 meeting and accommodations at work. (Section 504 is a federal law that protects students with disabilities from being discriminated against.) He said, “I need you to fight for me, Mom. The school isn’t listening.” It’s the first time he has admitted he needs help!

Congratulations to all contributors!

Rookieauthor
Thoughts From A Complex Mind

Helping others understand mental health in a unique way

The long and winding journey after loss

It contains the world best places and things.