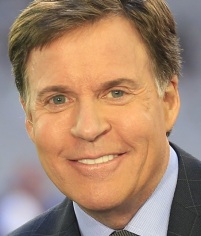 Emmy Award-winning and respected sports broadcaster Bob Costas, speaking as part of a panel at a symposium at the University of Maryland, stated that there are irreversible “cracks in the foundation” of the “juggernaut” and “cash machine” of American football that will eventually lead to a decrease in football’s stature.

He cited the work of Dr. Bennet Omalu, who found a degenerative brain disease in the brain of a deceased former Hall-of-Fame player of American football. He described the disease and named it chronic traumatic encephalopathy (CTE). (Dr. Omalu’s story and the negative reaction of the National Football League are depicted in the movie “Concussion.” Will Smith plays Dr. Bennet Omalu.)

Dr. Bennet Omalu & Actor, Will Smith at opening of “Concussion”

Costas said “The reality is that this game destroys people’s brains.” Concern is growing. Some players have retired early. Participation in youth tackle football leagues is declining, as parents struggle with the rapidly emerging and compelling evidence. Costas also said “… if I had an athletically gifted 12- or 13-year-old son, I would not let him play football.” Costas’ comments were supported

by those of ESPN’s Tony Kornheiser, who said that football is going the way of boxing. (Full story – listen to Costas and Kornheiser in the second video – minutes 24:03-29:50.)